Mattanu is a Hebrew phrase meaning, “gift from above”. This is the underlying factor why we want to share Gods creation with everybody. This 4700 ha (11600 acres) Game Reserve, owned by the Kriek family, started in 1991 when the owner, Dr JC Kriek, originally from Zimbabwe, imported 95 endangered Roan antelope and 65 rare Sable antelope species into South-Africa from Malawi.

The profit returns from the Malawi operation was used to purchase Mattanu Private Game Reserve, which was then a cattle farm, in 1990 and to date many millions have been spent in the development of the infrastructure and the re-introduction of numerous species. To date there are over 36 different animal species and approximately 700 animals on Mattanu.

The Northern Cape is a very dry province and therefore not many diseases exist in this province. This is one of the main reasons way most of the animals breed so well and why the conservation of all our species are so positive. This is all worthwhile as Mattanu Private Game Reserve is not only a Game Ranch or a business, but a dream being realized and a passion of the whole Kriek family.

The breeding of endangered and rare antelope species is the main industry at Mattanu along with the game capture and immobilization by Dr JC Kriek, veterinarian and commercial helicopter pilot, and his son Johann Kriek, commercial helicopter pilot. Mattanu’s private helicopter is also used in the very popular bushveld dinner fly-inns, helicopter game viewing and the transportation of numerous guests. Therefore it is a very handy tool in the eco-tourism on the farm, managed and marketed by the younger son, Jacques Kriek, whom finished his degree in tourism management and marketing. The Kriek family is personally involved in the reserve and with all tourists and visitors to Mattanu and thus guests can be assured of great service and hospitality through their personal attention to your every need. The catering on Mattanu is done by the mother, Daleen Kriek, and the distinct flavours of the unique South-African dishes is brought out in all of her creative and divine meals. Mattanu also employed another chef from Zimbabwe to define the service and combine the African aromas to create an experience rather than a meal. The youngest daughter, Heleen Kriek has her degree in Somatology (beauty therapy) and future plans for Mattanu will include a natural state-of -the-art health and fitness spa.

It was the younger son, Jacques Kriek, who saw the need to diversify and market the existing product to tourists. Therefore the tourism part of the business started developing in 2006 and very soon after that we saw a great need for an upmarket lodge, conference facility, wedding venue and luxury accommodation in the Northern Cape area. The Northern Cape with its Kalahari Bushveld savannah has so much to offer if marketed correctly. So we started with our new developments in September of 2006 and finished around November of 2007.

Hopefully this investment into our beautiful province will bring more feet to the Northern Cape and increase the economic contribution and multiplier effect the tourism industry already has. The local community of Barkley-west and Kimberley benefited greatly from this development as only local labour was used and local businesses and establishments were supported.

The new development entailed a new lodge with fully equipped kitchen that can easily cater for up to 150 delegates in a truly traditional way. The lodge also includes a bar area, an underground wine cellar and state of the art conference facility. In addition to the lodge there is a wooden deck walk way to the centre of our new island centre swimming pool area which is overlooked by a natural rock waterfall feature. A tiled pathway leads you from the lodge to the new luxury tents. All five tents are air-conditioned, have their own private decks, mini-bars, jet-spa baths and under floor heating. A luxury thatched roof suite and log cabin is also available for families as a fully catered or self-catering option.

Our game capture safaris are often run as part of overseas veterinary student courses. During these courses we mentor and transfer skills to up and coming wildlife veterinary enthusiasts. One of our aims is to keep this 4-star and AA superior graded establishment affordable to the local and international tourists and share our conservation efforts with everyone with a sense of adventure. These unique factors contributed to the numerous accommodation, service and wine list awards Mattanu has received over the last 11 years.

The Kriek Wildlife Group was joined by Heleen’s husband Burger Schoeman in 2015 and his role is to manage the reserve and infrastructure along with all staff relations. Future plans include a meat processing facility which will also fall under his expertise. The Kriek Wildlife Group’s latest project was to host a very successful annual auction in 2016 and 2017 where everybody is involved in the planning, game capture, execution of event and delivering of animals. 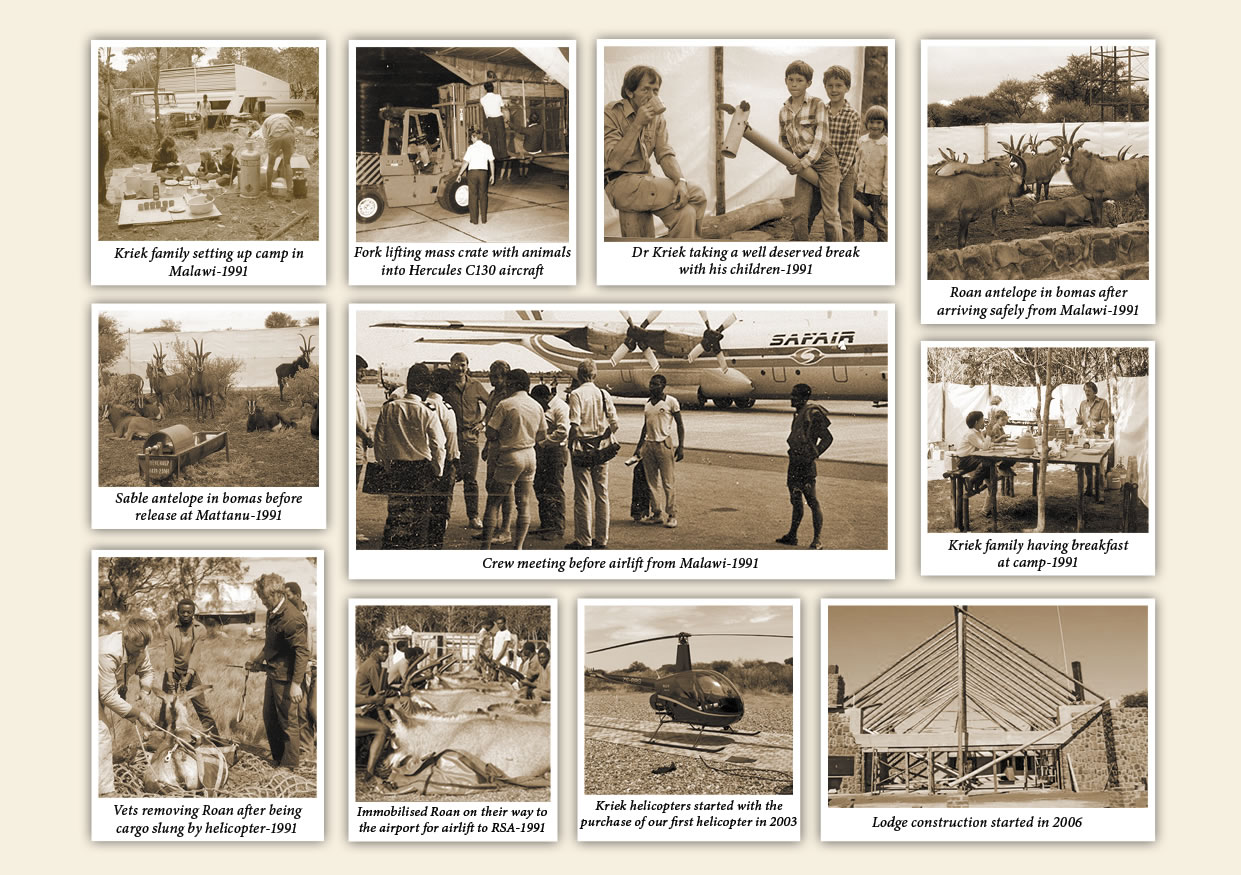